For the men who believe that tight pants weh itch up undah dem baxide makes them the cat’s pajamas.

We have spoken and consulted with each other many times about the issues of your natives. This letter is no different. This time I have an issue with some of your men.

Before the ranting begins, i’d like to thank you for those flowers you sent me and the get well card. I do feel the love. xoxo. (Yes I know the exes and ohs are typically put at the end of letters but I dare you to make me conform. Jus try it. kmt). I really do appreciate the gifts of love though. Thank you. I am feeling a little better. Will give you updates on my road to being healthy again.

Call me judgmental all you want darling. I care zero. I cringe every time I see a creature of the male human species worm their bony or not so bony bodies in trousers that straight up look like very tight female skinny jeans. Various colours and material type in their skinniest forms are worn by some men and I truly fail to understand why they would torture themselves like that. The torture that their gonads must go through with little to no room to breathe, the torture of not being able to walk correctly. Imagine a man at a party in his tight pants; poor ting cyah move because the pants will in fact buss out and leave him exposed. What a ting.

Many might say that the tight pants are really just a fashion statement. Fashion statement my ass. It’s nothing but a sorry excuse to look tacky while pretending to be well dressed and attend to business freely. I think men who wear tight ass pants are ugly and I think that their friends and loved ones who allow it to happen are also ugly. *Ugly defined means being offensive to sight and all other sense*. These men are ugly because they choose to wear tight pants and literally assist in the destruction of their manhood and they are ugly because the clothes really and truly does nothing for their appearance or image but places large stamps of TACKY and HIDEOUS all over.

But who am I except a regular girl from the suburbs who only shares her opinions? I dare not go to their faces and tell them how ridiculous they look. You know why though, because there are not enough girls like me or similar to me out there to tell these guys the truth, World. The result of that is these foolish men swearing on everybody who dem love weh dead grave seh they’re the cats pajamas. Nuhbady cyah more bashy than they are. NUHBADY. Afterall, Bogle did say “Fashion Ova Style”. Listen to me as I  kiss mi teet and roll mi eyes. What they need to do is just go home to dem damn bed and guh sleep.

There are some men, World, who will dress to puss foot and then upon closer examination you realize that their pants are way below their waists and their pants are tighter than the skinny jeans women wear. Kill dem dead, the men believe that they’re sexy you know. Sexy gone to bed. Some men, however wear normal fitting pants and still have it itch up under dem baxide. How do they walk comfortably? I have no clue. Every minute all you see is this yout pulling up his pants right under him baxide and not to him waist.  That’s another form of torture. Torture of having to constantly pull up or hold up the pants. The pulling up reminds me every time of a Huggies ad where the baby shows his or her parents that they’re big kids now as they graduate to the pull – ups type of diaper. Can you imagine, a big man pulling up his pants on repeat because it continues to fall? No longer a big kid now it seems.

I recall seeing a young man in a bus who, from head to torso (as he was sitting), looked very much inoffensive to sight based on his attire. I kept thinking to myself that he did a decent job at putting himself together. That brief blissful moment in time stopped as he stood to exit at the terminal. My yout stan up and I swear to you, World, I was flashed with nothing but butt. Yes he was wearing underwear but his butt was right there, uncovered by the pants which was below his ass. My views switched automatically. The young man went from decent to offensive in a matter of minutes. Nobody, at least no one from Suburbia, wants to see any man’s bony baxide or fat ass for that matter on the street while their pants are on level 2 or 2.5 of the lower half of their bodies. Please also note that even if the pants are worn to cover the baxide, UNDERWEAR MUST NOT BE SHOWN. That too is tacky.

Yes, I also know that there are some men who express themselves through their attire. I get that. Tell them this 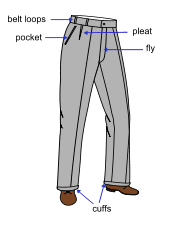 See this image? Where the belt loops are is where the pants must be worn.

Anything else is offensive and punishable by Suburban law.

According to the laws of Suburbia, men should always wear their pants by their waist and not below their baxides. No, not a baxide. The consequences of not adhering to said law is punishable by condemnation and sentencing to Suburban prison and rehab. Men will only be released until they’re re socialized into practicing the correct  manner in which to wear their trousers.

Now, World, I also have issues with some of your lady natives. Don’t for one second think that they’ll be granted pardons, because that’s  not going to happen. My next health update and love letter will inform.

Bringing Out the Best in Our Kids